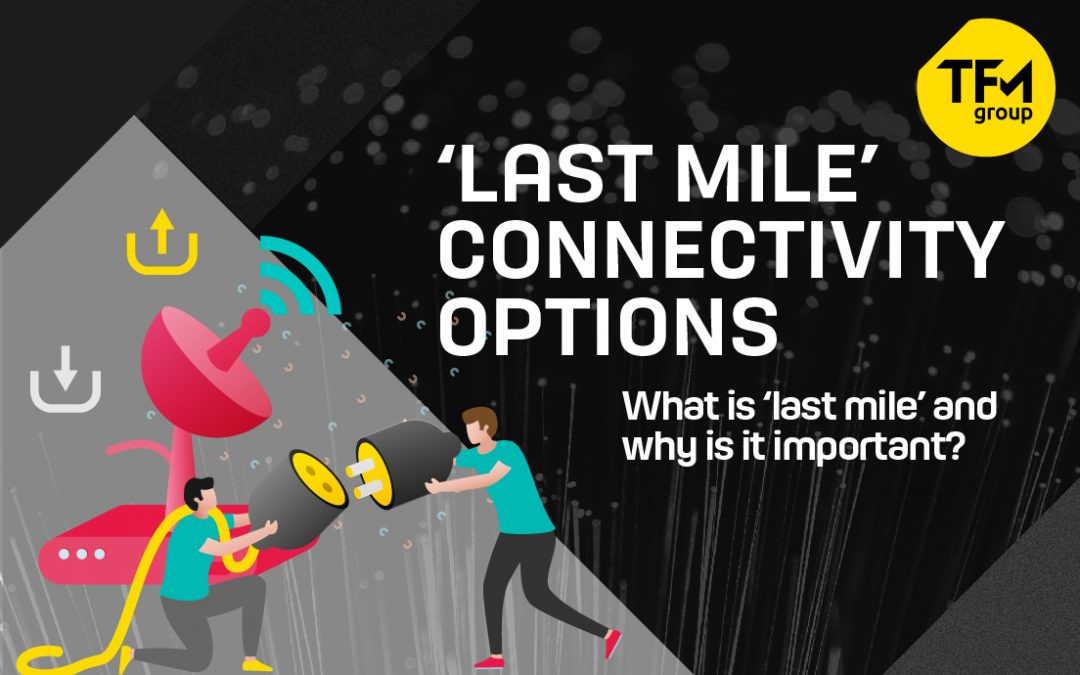 Lots of things impact your network performance. While most businesses have a pretty good idea of how bandwidth affects network speeds, they’re not so clear on how the quality of the physical infrastructure can raise, or lower, performance. Nowhere is this more apparent that in the final stretch of the connection to your premises – the last mile.

What is ‘last mile’ and why is it important?

When we say ‘last mile,’ we’re referring to the element of the circuit between the local telephone exchange and the customer’s premises. The circuit is typically made up of fibre (i.e., glass that carries light signals) or copper (that carries electrical pulses). Or it can be a mixture of both.

Often, the data that you retrieve such as an e-mail, file or a web page will come from a data centre somewhere. This piece of data will hop, skip and jump through the core networks of quite a few providers on its way to you. The bandwidth capacity of these core networks will be very high. In fact, parts of the network could be in hundreds of terabytes per second.

Therefore, it’s reasonable to conclude that the ‘last mile’ part of the circuit is likely to be the bottleneck if you’re not getting great performance. As such, it’s important to get this choice right when designing connectivity infrastructure.

The two main types of connectivity are broadband or ethernet (a leased line).

This set-up is much more economical compared to having an individual circuit between each dwelling and the telephone exchange. One street cabinet might service 200 dwellings, for example, which means one piece of cable between the street cabinet and the exchange will cater for 200 broadband connections.

But there are a few things to consider.

The issue of ‘contention’

Let’s say there are 200 broadband connections, each with 50Mbps of bandwidth going to the exchange. This would require a 10Gbps connection between the cabinet and the exchange to guarantee that bandwidth. Now, we’re starting to get uneconomical. So, something called ‘contention’ is introduced.

Chances are that all 200 dwellings won’t be actively downloading at exactly the same time. Therefore, a circuit of (say) 2Gbps may be in place, which means that the aggregate capacity for those 200 dwellings will be 2Gbps. When the demand for data increases above that 2Gbps, you won’t get your advertised speeds. This is ‘contention’ – you are effectively contending for bandwidth with your neighbours.

With an ethernet circuit, your provider will ensure there is a dedicated and guaranteed bandwidth, and the circuit will not be contended with other users. This means, if you purchase a 1Gbps ethernet circuit, you will always get 1Gbps, regardless of what the data demand from your neighbours is.

Broadband is generally a consumer product, and consumers tend to use a lot more download rather than upload data traffic, for example, downloading films, files and web pages. Broadband will have a higher download speed compared to its upload performance. You might see “80/20” broadband advertised, which means 80Mbps download speed compared to 20Mbps upload. This is fine if your traffic profile is orientated towards download traffic.

Businesses, on the other hand, tend to have more balanced requirements. It’s more common to upload a work file to Sharepoint, for instance, or run a series of bi-directional video calls. With an ethernet circuit, a 1Gbps circuit means the upload and the download speeds are capable of the 1Gbps.

The other main difference is the service level (SLA). Typically for ethernet circuits, there will be a 4 or 5 hour SLA for a line fault, operating 24/7. This is ideal where connectivity is critical.

There are also ways to improve the resilience of the ethernet circuit. BT Wholesale’s RA02 product has two independently routed cables between the premises and the exchange, for example. This means that if someone accidently breaks a complete cable duct, the other resilient pair will kick in seamlessly. 4G/5G back-up is also an option in some cases.

By contrast, the SLAs for broadband circuits will be days rather than hours. If there is a fault at the weekend, it probably won’t even start getting looked at until the next business day.

On the flip side, the lead times for ethernet circuits are usually longer than broadband and might involve additional construction work if new infrastructure is required. It depends on what is already in place compared to the requirements of the new circuit. A survey will uncover the requirements and if the charges are too expensive, the order can be stopped.

Sometimes, permission from landlords is required to install the physical circuit. You already know how time-consuming that can be!

Finally, cost: an ethernet circuit will likely be more expensive. But the costs have come down dramatically over the last few years, so it’s worth getting in touch with us as you might be able to get an ethernet circuit set up for less than you think.

Full Copper (DSL) – this is where the circuit is all copper between the exchange and the premises. DSL is the slowest broadband, and the circuit has probably been in-situ for 30+ years. Speeds top out at several Mbps but will be cheaper than fibre.

Full Fibre (Fibre to the Premises or FTTP) – this is where the circuit is all fibre, and you will have the best reliability and potential for highest speeds – up to 1Gbps. But remember, the service will still be contended.

Fibre to the Cabinet (FTTC) – as the name suggests, the fast fibre completes the circuit for what is likely to be the longest distance, then the existing copper circuit runs to the premises. This is an economical balance between cost of network upgrade vs performance.

What’s available to you will depend on the provider and the location of the premises. If you want to talk about what is available for your sites then please contact us by clicking HERE.