How Can You Make Your Phone Battery Last Longer? 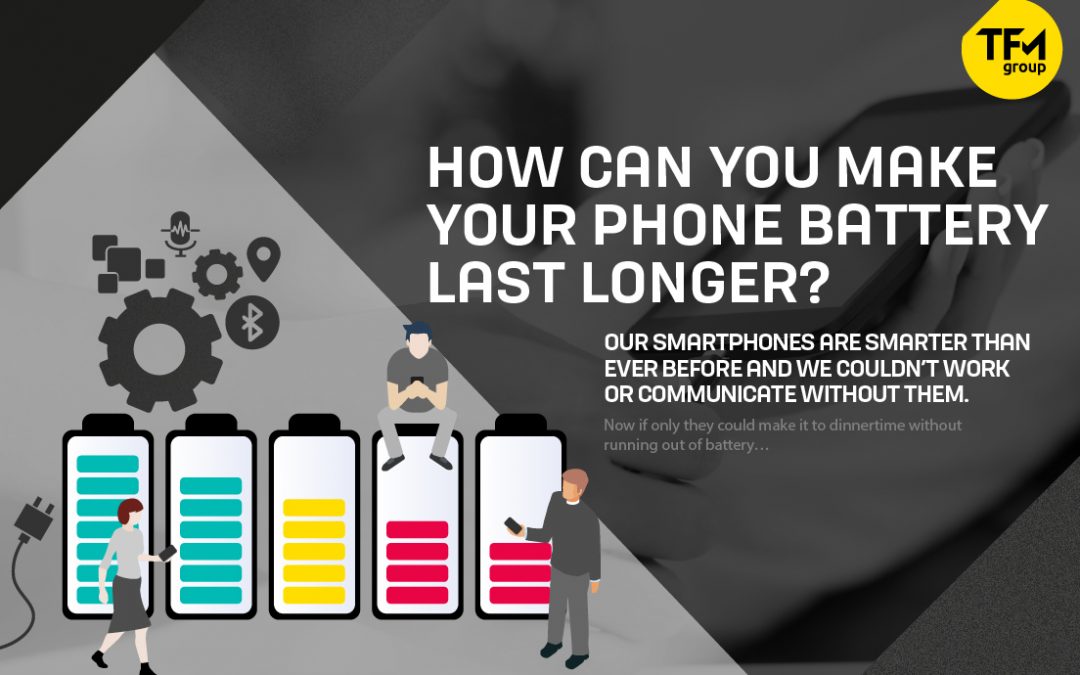 Our smartphones are smarter than ever before and we couldn’t work or communicate without them. Now if only they could make it to dinnertime without running out of battery…

Here’s a problem that every smartphone user can relate to: you haven’t viewed any videos or played any power-guzzling games all day, but still your battery is flatter than a pancake under a steamroller. You know you charged it to capacity last night. What’s going on?

While today’s phones pack a punch with sharp screens and high-end features, all of these things take a toll on your battery. Here’s why your battery might be failing, plus some tips for squeezing the most juice from your device.

For smartphone users, the answer is simple: the many functions on your device are to blame. You may not even notice them, but the apps and widgets and wallpaper are constantly on and guzzling power faster than a student chugs beer. Take your GPS location service, for instance. It is not only used by navigation programs, but also by apps such as Instagram, Twitter and Facebook, the phone’s camera and Google search.

Bluetooth is another power guzzler. If you’re not connecting to a speaker or a set of Bluetooth headphones, then switching off your Bluetooth connection will make a big difference to how long your battery lasts.

We’ve all set our smartphone to vibrate in order not to disturb others when we’re in a meeting, but did you know that keeping your phone in vibration mode uses more power than a standard ringtone? And many phones, including Samsung’s flagships, are notable for the fact they will default to Full-HD+ displays. Changing the screen resolution can really slow down the battery drain.

Finally, there’s signal searching. If you live in an area with patchy 4G coverage, then you’ll know how frustrating it is to see “searching” on your smartphone often, and just how fast your juice runs out! Smartphones are geared up to constantly search for the best mobile network – if you’re constantly toggling between cell towers, then you can kiss goodbye to your battery life.

How do you save the battery?

The first thing is to stop apps you’re not actively using from running in the background. From there, it’s a case of optimising your battery-charging habits, and making a few adjustments that can help smartphones run a little longer. Here’s the breakdown:

Kill background apps. Bluetooth, for example, can be deactivated at the push of a button. For GPS, you’ll have to search a little deeper in the settings for “Location” (Android) or “Location Services” (iPhone). From there, the location can be switched off completely.

Block access to GPS: Alternatively, you can head into the settings for individual apps and block them from accessing the GPS location. This is an obvious thing to do for apps where location data doesn’t make much sense.

Activate airplane mode: Airplane mode cuts off all signals to and from your phone, meaning WiFi, cellular and Bluetooth functions are disabled. Unplugging entirely may feel uncomfortable for people who are used to being perpetually connected, but it’s easier to do a sweeping disconnect than disable individual functions if you’re trying to save your battery.

Nix voice assistants. Siri, Cortana and other voice assistants are a massive drain on your battery. Avoid – and maybe go back to using a search engine to get the answers you need?

Activate battery-saving mode. Most modern phones come with a battery-saving mode that dims your screen and stops many of the apps that are running in the background. You will lose some functionality, but it could be a lifesaver when juice is running low and you need to preserve some battery life.

Manually set the phone network in the settings. Yes, it might seem like a step back in time but if there’s only 2G or 3G in your area, you can specify that the phone should only access this network and ignore the 4G network. Browsing the web will feel like wading through treacle, but you’ll still be able to make calls and send texts. Network data generally is strenuous on your battery, so use WiFi whenever possible.

Get a power saving app: Plenty of free apps are available that help your battery last longer, like Battery Saver for iPhone and Go Battery Pro for Android. These apps pinpoint bugs and power-hungry apps so you can see what fixes you need to make to save your battery. The jury’s out as to how useful these apps are –  ultimately, you’re just adding more programs to run down the battery, and some don’t offer much more than your phone’s native power-saving functions. But if you like using them, then all power to you.

Yup. We really made that joke.

Most of us leave our phones charging overnight, but leaving your phone plugged in when it’s fully juiced is bad for the battery in the long run. Once your phone is fully charged, it gets mini trickle charges to keep it at 100% plugged in. This stresses the battery.

While it sounds counterintuitive, it turns out your battery is much happier if you charge it little and often throughout the day, to around 40-80 percent juice, instead of plugging your phone in for a big charging session overnight.

This means you’ll probably want to invest in a portable charger to keep you topped up throughout the day. There are tons of affordable options, and most will slide into your jacket pocket. Wireless charging is also very popular, as these let you power up compatible smartphones without fiddling around with a cable, just by resting them on top of the battery.

If you find yourself reaching for a charger multiple times a day, then it could be a sign that your battery is on its way out. Most batteries start to degrade after 500 charge cycles, which is around two to three years of usage. If you notice your battery losing charge right away – meaning it immediately drops from 100% to 90% or even 80% – then it could be ready for a trip to the recycling plant.

Now, changing the battery on a smartphone is not hard for someone who knows what they are doing. Problem is, most of us do not know what we’re doing! Most current phones come with non-removable batteries and you could do some serious damage if you attempt a DIY replacement. We recommend finding a qualified phone person – or speak to us about organising a service.

Sometimes, changing a battery is a false economy and it may be time to buy a new phone. When shopping for new devices, look for phones that top the lists for battery life tests: we like this one from GSM Arena. This test puts phones through the mill of making calls, browsing the web and playing video until they run out of juice, then scores for endurance based on how long they can go between charges against different usage patterns. The Realme 6i is the current battery champ, and you’ll see some pretty great performances from Lenovo, Samsung and Motorola models as well.

It’s just one of the many features we look at when arranging new phone packages for our business clients. Everything to boost your productivity and keep your costs down!