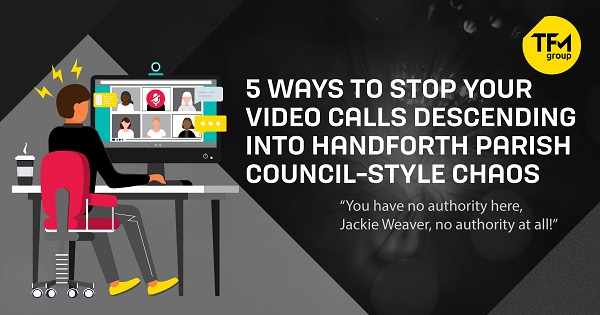 In the crazy world of social media, cats are more likely than councillors to become overnight viral sensations. But that’s exactly what happened to the members of Handforth Parish Council after a recording of their chaotic Zoom meeting surfaced on Twitter.

The meeting had all the elements of a British comedy classic, from foul-mouthed rants to the clerk, Jackie Weaver, booting out council members who had lost their cool. Social media is now flooded with Handforth-related memes. It’s even got its own spoof trailer!

For those of us who sit through video meetings day after day, the temptation to just lose it with a boorish colleague is shockingly familiar. So how do you make sure your calls stay nice and respectful? Here are five lessons we can all learn from Handforth.

1. Have an agenda for every meeting
Holding a meeting online is a tough gig when you can’t see people’s faces or their body language. It’s easy for the loudest voices to dominate. You could invite Jackie Weaver to keep things on track…but it’s easiest to have a clear agenda.

2. Establish some ground rules
There are certain housekeeping rules that everyone should follow to make sure the Zoom experience is a pleasant one. Here’s our top five:

3. Only invite participants who need to be there
Avoid blanket invites. Too many cooks spoil the broth and all that, and inviting too many people or the wrong people is a recipe for things getting heated. “Read the standing orders! READ THEM AND UNDERSTAND THEM!!” as they say in Handforth.

4. Test your tech before the call
Test your mic and video before launching the meeting – all platforms let you do this. Fiddling with the camera is 2021’s digital answer to picking your nose mid meeting, so get those niggles sorted before you start.

5. Be on time, or early if you’re the host
Getting there late and in a flap is not a great career move, especially as your commute time is literally a couple of seconds. If there’s a genuine scheduling conflict, let the host know in advance.

We hope these tips will help you put your best behaviour forward!